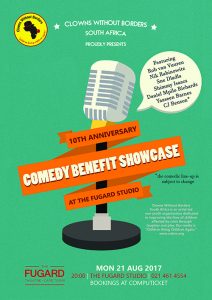 Clowns Without Borders South Africa is celebrating their 10th anniversary with a once-off Comedy Benefit Showcase at the iconic Fugard Studio Theatre at 8pm on August 21st.

Tickets are R150 and on sale through Computicket.

Be a part of this worthy cause and enjoy a night of star-studded comic relief at the Clowns Without Borders South Africa 10th Anniversary Comedy Benefit Showcase.

Date: Monday 21 August
Time: 20:00
Cost: R150
Venue: Fugard Studio Theatre
Tickets can be booked through Computicket
Parental discretion advised. Content may not be suitable for children under 16 years of age.

*the comedic line up is subject to change