Crossing the borders of culture, language, and creativity – Update from Cape Town!

The opening week of Clowns Without Borders/Clowns Sans Frontieres’ SA-France Season 2012 Cape Town tour has finally drawn to a close. Phew! We can look back o the days past with a sense of great achievement and joy.   We brought a show to life, united as a team, forged strong partnerships, and, most importantly, sparked massive amounts of happiness to thousands of children across the Cape Flats.

The week truly began last Saturday and Sunday with the final two days of an intensive 3-day creation period for the 6 clowns and 1 artistic director.  Although, the rehearsal process was improvised and the material developed from the magical minds of the clowns, there was a general theme to the project that was books and literacy. The theme was chosen to fit our show with the mandate of Nal’iBali, our partners for the first week, who run reading clubs across the townships of Cape Town.   The result was an eclectic show that combined different styles of comedy that were linked 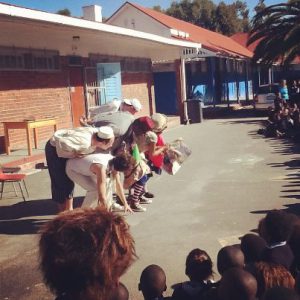 together thematically. Adding to diversity of the project was the fusion of South African and French playing styles that occurred during the creation: The French, with their experience in skilled improvisation and poetic interpretation, danced together with the South Africans, and their tendency towards classical comedy routines adapted and evolved with local content.

On Monday the tour began and we were allowed to share our fun with the outside world. Over the week the show has grown and transformed through the reactions of the audience and some reordering of scenes and tightening of transitions. The response has been outstanding as children at School after school embraced the chance to laugh freely and publically. At many schools, they originally had planned to limit the show to certain students, but by popular demand the show was opened to everyone.

A highlight of the week was after our first show on Monday at Injongo Primary in Khayelitsha where the drama club treated us to their own performance after the show  (it was themed on crime in the community). As it turned out, this was no ordinary performance since the students were defenders of the Fleur De Cap in school theatre. The show was extremely powerful, the performances stunning and we were all left questioning the world around us.  In the end, we left inspired with the vast and broad potential of theatre and play in bringing about real and positive change.

Many thanks to the National Arts Council, Institut Francais, and Europcar for making this project possible!