It has been an inspirational two weeks in Cape Town. CWBSA has combined its artistic interventions and Parenting for Lifelong Health (PLH) for the first time. We continue our PLH work with local non-profit organisations, as well as welcoming two new organisations into the family, thanks to our partnership with the World Childhood Foundation. Capacity building of facilitators from Mothers 2 Mothers, Project Hope, Africa Unite and the Manenberg People’s Centre took place from the 29th of July – 2nd of August. 12 facilitators were taken through the 14 sessions of PLH Teens. These workshops will lead to a gradual scale up of the number of PLH facilitators, coaches and trainers in the Western Cape who will be able to reach more and more families.
On a sunny winter’s morning in July, the Methodist Church in Observatory was the perfect venue for both workshops and rehearsals. Session 12 was underway with a community mapping exercise. Facilitators were asked to map their communities in Gugulethu, Manenberg and Khayelitsha. The discussion focused on unsafe and safe areas, also identifying how important it is that teens are involved in this risk assessment. What adults may perceive as safe, may not be the same for teens, the church was given as an example. The session was a wonderful culmination of PLH Teens, showing how important it is to talk and listen to each other, make rules, provide consequences and to be specific. The aim being to avoid miscommunication and conflict in the family. In the other hall, the diverse artistic team comprising of team leader, Sibusiso Khambule, Sussie Mjwara, Matthew Stuurman and Asanda Rilityana were busy going through their last rehearsal before performing for the facilitators. These free performances will tour Cape Town to encourage parents, caregivers, adolescents and children to explore and nurture relationships within their family. The show will be designed to encourage families to think about how to work together within the home, as well as how to create a safe and encouraging environment.
The social activation campaign from the 5th – 9th of August 2019 will mobilise caregivers and teens to participate in the PLH programme for 14 weeks in their community throughout the spring. The performances were spread out as follows:

On Wednesday the 7th of August, the Easter Peak Primary School in Manenberg was visited. Sadly, due to heavy rain the last days, it was too wet to be outside. This meant only Grades 6 and 7 were able to watch the show due to lack of space. Clowns Olive, Bobby, Sasko and Sisu told their stories, and entertained the kids with khu phiswano, horrible lullabies, the importance of rules and why it is best to work together. It was a great privilege to see that the clowns were able to reach out to urban children and youth in an underprivileged area of Cape Town, known for its gangs, violence and drugs. Hoots of laughter, instructions shouted out and giggling were heard throughout the performance; the atmosphere and energy in the overcrowded library was electric. We noticed that ‘Bobby’ was a huge hit, in particular with the girls! We left the school with warm hearts, witnessing what play, laughter and theatre can achieve in the harsh realities of the world!

We wish all our partners good luck as they recruit families for the PLH Teens programme!! 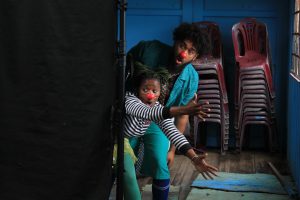