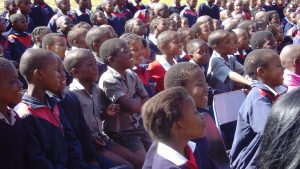 It’s 4am and I’m wide awake. I have just had a dream where I am late for a gig and don’t have a costume and I’m running around stressed out of my mind. For some reason this seems to have made me not want to get back to sleep. I do manage to drop off again but still wake up before my alarm. I seem to have fallen into a rural rhythm. I stumble off to the shower and get ready for another day of shows out here in rural KZN.

The rest of the team are starting to surface, get their caffeine fix and fill their stomachs. It’s going to be another long day. We are staying at a lovely accommodation establishment attached to the Centocow Monastery, just outside Creighton. We pile into the minibus (Thank you Europcar) and head for Sunflower HELP, our partners in Creighton. We pick up Samkelo, our guide for the past couple of days who helps us find the rural schools. You can’t trust a GPS out here. Local knowledge is much more useful.

We head through Donnybrook and out to the first school. This school has a hall (most schools don’t) and even a stage. Unfortunately there is a little bit of miscommunication and we don’t manage to get the smallest children into the front first. There is a bit of a crush as the kids are going a bit crazy. They saw a CWB show last year and are hyped up and very excited. Eventually we manage to push the older kids back and get the little ones into chairs at the front. There is a bit of stick waving by one of the teachers which makes us all a little worried. Corporal punishment may be illegal but it is still alive and well at some rural schools and the last thing we want is kids getting hit because we have made them excited.

The kids start singing hymns and we have a quick discussion behind the backdrop about what to do if things get out of hand (take off our red noses and try to calm things down before continuing). There is a lot of shoving during the show and we are really worried about the little kids at the front getting crushed. Luckily it doesn’t get completely out of hand and we don’t need to stop the show or cut it short (this is a last resort, which we only use if we see that we are losing control and kids are going to get hurt.)

We move on to the next school which is much smaller and calmer. We do the show outdoors with an amazing view of the valleys leading off into the berg and Lesotho behind us. There are a lot of goats wandering around which freak out Phumi a bit and we try to herd them away while the kids are let out and fed (part of the government’s nutrition programme). We get them seated and soon the laughter begins.

The show is all set at school and on the playground so is full of things that they can relate to. It is also created around the themes of friendship and bullying, and we often hear kids and teachers pointing out which character in the show is which student at their school.

Our latest show is completely non-verbal as for this tour we have partnered with a Deaf and hearing integrated theatre group from Cape Town called FTH:K and some of the schools we are visiting are Deaf schools. The show is also quite prop light and we do a lot of mime, especially in the beginning when we mime our characters’ morning routines: brushing teeth, washing faces and making breakfast. I think a lot of the kids have never seen a show like this before and it sometimes takes a couple of minutes of confusion before they start to realise what on earth we are doing. Once they get it the laughs come thick and fast though. The kids at the Deaf schools definitely pick up on the mime faster than the other kids.

This is the first show I have done which is completely non-verbal. We usually try and use as little language as possible but not using any at all is new to me. It’s great as it can be used not only at Deaf schools but also in places (and even other countries) where we don’t speak the language. I have also never done a CWB show at Deaf schools before and it goes down pretty much exactly as it does at the hearing schools. I have done magic before at Deaf schools and it has always been a little bit of a struggle as I am used to using a lot of puns and word play in my magic. This show is so much better suited as we have designed it to work at both hearing and Deaf schools.

We arrive at the third school for the day and start to set up for the show. There is a pall of smoke over the area we want to perform in and the thick smell of burning plastic. (There is no such thing as refuse collection out here.) There is also a bit of wind which blows the backdrop over while we are trying to set it up. We split up and some of us manage to hold on to the backdrop and stake it down while the others try to manage the crowd and ensure that the smaller children get the front row seats and the biggest kids are standing at the back. Thankfully by the time we are ready someone has put the burning plastic out and we don’t have to breathe it in for the whole duration of the show.

It’s a great show, with wonderful reactions and good volunteers. This is good as it gives us energy. It’s now midday and getting pretty hot. Getting energy back from the crowd helps us to stay focused and excited.

After the show I have lots of kids come up to me and ask me to show them how I do the magic with the strings. I start showing them some simple magic tricks, removing thumbs and fingers and putting them back again to cries of ‘Hhawu, Angege’ and ‘Unamanga!’ Soon I have a crowd of kids around me jostling to get a view and I try and calm it down and go over to help the others take down the show. This is no good as I bring with me a crowd of kids so I try and take them away again and distract them with more simple magic tricks with stones and pencils and show them how to juggle with stones so they don’t think you need fancy juggling clubs in order to do it. As we drive off the whole school waves us off, still singing the song we ended the show with.

Good job clowns. Our hearts full and stomachs empty we head off to the Donnybrook Spar for some sugary beverages and something to eat. Tomorrow we head off to Ixopo and then back to Durban for the last couple of shows before the out of towners get back on a plane and head back home. This tour is almost over.

The National Deaf Education Tour is a collaboration between FTH:K (www.fthk.co.za) and Clowns Without Borders. Sponsorship for ground transportation is made possible by Europcar (www.europcar.co.za).