Early this morning as I slept, I dreamt I was clowning in Southern Sudan, and I was overwhelmed with excitement. As I slowly awoke from the dream, under the churning air from a ceiling fan, the realization struck me: I really am a CLOWN IN SUDAN! 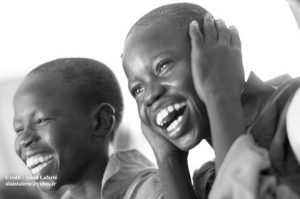 We are now more than a week into our CWB Project Sudan, and today marked our fifth day of performances in Juba. So far, we have clowned in orphanages, schools, hospitals, prisons, down small dusty streets, and basically every place we’ve set foot, and all along the way, under the scorching Southern Sudanese sun, children and adults alike have laughed, clapped hands, and smiled appreciatively. We clowns did very nearly melt that first day of performances at the prison, but later that night, the sky opened and gave us a very thorough rainstorm, complete with a few big booms of thunder and some flashes of lightning thrown in for good measure. We were very grateful. The morning after the rain, our driver took us to our first show of the day via one of the enormous four-wheel drive vehicles provided by IRC. In clown style, we bounced wildly along the rough, (understatement!) reddish, dirt roads that keep the fleets of Juba’s jeeps working overtime. We feverishly clutched red noses, accordions, props, and half a dozen frozen water bottles. Occasionally, we paused before medium to Olympic-sized swimming pools in the road, allowing oncoming traffic to pass. Happily we clowns take to the jeeps and roads of Juba daily on our quest to make children laugh, the physical exertion of just trying to stay seated serving as a kind of pre-show warm-up.

The Ursana Center is the first school we visited. It is a school and rehabilitation center for children who are deaf, developmentally challenged, or physically challenged. With the help of a welcoming staff, we assembled our very sweet, young, receptive audience outside and clowned for them. In our show we use a bit that is a personal favorite of mine where we, the clowns, aren’t strong enough to lift a cowbell, so we call on an audience member to help us out. That day, our help came from a very bright and enthusiastic boy who, in spite of his seizing hands (possibly from cerebral palsy), flexed his muscles in a very convincing strongman pose and lifted the bell high, impressing clowns, friends, and teachers alike. A moment like this one goes on in the universe infinitely. Later that same day, we clowned at the woman’s prison. The women we visited there have been imprisoned, some with small children and babies in arms, for adultery, murder, and as lunatics. As with the male prisoners, these were not the criminals I’d been warned about all my life, but instead vulnerable human beings living behind immense walls.

We’ve now clowned at multiple schools, always seeking out the shady places to assemble the students. Ursana Basic School is a public school comprised of about 1,000 students. We got lots of smiles there while clowning under a light rain, encircled by the kids. A day later, we visited St. Joseph’s School and clowned for 1,200 exceptionally excited kids. I’m pretty sure that was the largest audience I’ve ever stood before. Then we went to CMS School and performed for 600 kids. At one point during the show, an adolescent girl wearing a bright green school uniform leapt into the playing space, ululating, throwing fragments of paper confetti, and dancing, to the wonderment of the clowns and the uproarious laughter of her peers! She was a smash hit!

At the Juba Hospital, women holding their tiny sick babies sat outside of the old, onestory building, trying to stay cool under the shade of a few trees. However, when we began to play, many of the families drew together under one tree to receive the respite of silliness and laughter we were there to offer.

Tonight we prepare for the next leg of our project, which will take place north of Juba, in a hotter and even more remote town. Early tomorrow morning we will fly to Aweil aboard one of The World Food Program’s small humanitarian transport planes (an event in my mind rife with Indiana Jones-esque imagery). We gathered days in Juba like lessons about the perseverance and humor endemic to humankind. It is our hope that the coming days will be just as incredible, and that this letter finds you in the most humorous of spirits.