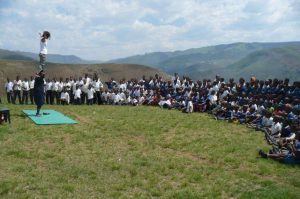 CWBSA has established successful links with Woza Moya and has followed their support by organising a show to be done in schools within the area. The shows held at its core the intentions to create joy, laughter and happiness. It also aimed to promote activities that inspire creativity and action. After a week of rehearsals, the creation of a 1 hour circus show including hilarious clowning, juggling, magic cigar boxes, tricky sticks, break dance, acrobatics and tumbling was choreographed to music which was used during the rural tour.

After arriving at the Buddhist Retreat Centre in Ixopo, where we stayed for the week, the Mr. Fish, Bongekile Mabuya, Sabee Shozi, and I headed off to our rooms on Sunday night to prepare for the week. We had 10 shows booked at schools within the community and 2 afternoons of visiting the circus school that CWBSA runs at Woza Moya Community centre. 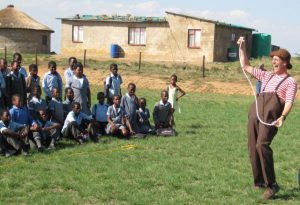 All shows were performed outdoors with the entire school participating, and in most cases, teachers and principals joining. Primary school and secondary school pupils of all ages were engaged in outbursts of laughter when the clowns performed their introductory Great Artiste routine and Madiba’s Banana skit. Sabee captivated audiences in his ability to inspire laughter through his original and cultural style of clowning. Mr. Fish has 30+ years of experience in clowning in a professional circus. His skill in juggling and clowning added substance to the show. And Bongekile…Miss Boss! The show would not have been complete without Bongekile. She was the thread that linked all acts and lifted the energy each time she appeared on stage. She accompanied Mr. fish in his juggling act and based all acrobatics. It was an honour to work with these performers.

Most of the communication during the show was done in isiZulu as most of the primary and some of the secondary pupils do not understand English well. The acrobatics routine and tumbling runs amazed audiences and the finale of high flying dive roll over 7 audience members added an element of danger and tremendous skill.  Break dancing was well received and audience participation ensured that not only the performers were having fun. 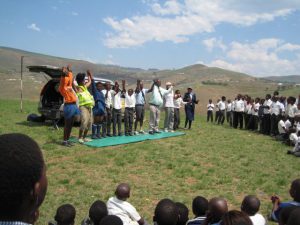 During the last few days of our tour, were joined by David Lichtenstein, an artist from CWB-USA. He performed a preshow with acts that amazed and captivated audiences with his slapstick humour and lasso skills.

We all are extremely grateful for the opportunity to share our skills and talent during this tour and extend gratitude and thanks to all partners involved. Siyabonga!