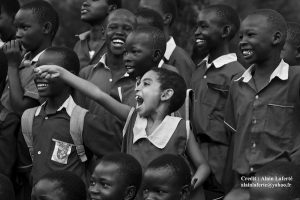 Today we performed in Juba, Sudan, for the very first time, for an audience of youth prisoners. Beforehand, our minds raced with the possible challenges we would be met with once we were inside. We heard that young men had remained shackled together during a cholera outbreak. We imagined hardened criminals. What actually happened there has changed us.

As we entered the courtyard we saw the prisoners roaming around. We were informed that all the prisoners were invited to attend the show, not just the youth.   Some men were shackled, others had intense tribal scarring on their foreheads, and some had what appeared to be staph infections. The youth were all sitting on the ground in the only spot of shade in the whole courtyard, and the youngest of them looked to be about 10 years old.  They had been waiting for us.  We sat in front of them while our partner organizations, Confident Children Out of Conflict and International Rescue Committee introduced us and gave an informational talk on Aids.

We begin our show by playing our musical instruments, and the prisoners’ immediate response was laughter.  Throughout the show eyeswere wide and grins were huge. They supported our performance with punctuations of applause and laughter.  We were a hit! All the inmates we brought onstage for the audience participation sections were respectful, cooperative, and funny. The section they liked the most is when our South African clown partner, Gavin, juggles three toilet bowl cleaners.  They were also impressed by his ability to ride a unicycle!

It’s probably the only unicycle that has ever been to Sudan.

After the show, the prisoners surrounded us, wanting mostly to try out the unicycle, but also to say thank you and to ask us many questions.  I probably should have felt nervous about being surrounded by murderers,  criminals, and lunatics, but these men and boys made us all feel very much at ease. When I looked into their eyes smiling back at me all I could see were humans.  Warm, kind, welcoming, humans.

PS Also at the prison, I broke my personal record for most terrifying  outhouse used.  But that is another story entirely that I’ll save for only the bravest souls.

Clowns Without Borders South Africa is collaborating on a project in Sudan working with our sister chapter, CWB-USA, the International Rescue Committee, and Confident Children Out of Conflict to provide emotional relief through to refugees from the current conflict. For 14 days in the grueling hot sun, Gavin Stockden has joined Gwen Rooker and Elisa Lane from the United States performing and teaching workshops in both Kenya and Southern Sudan (Juba and Aweil). Please read the following update from Elisa!