The Power of Clowns 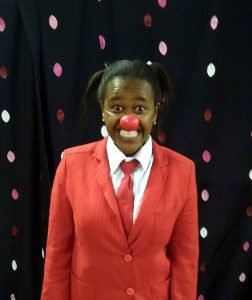 In October 2016, I went to a Clowns Without Borders SA workshop which was facilitated by Jayne Batzofin. I knew nothing about clowns except that they paint their faces and ‘scare’ people. I had never thought of myself as a clown before. The only reason why I went was because of the slogan, ‘children being children again’. I love children’s theatre, I LOVE CHILDREN! And that slogan gave me excitement, I wanted to know how CWBSA make children be ‘children again’, especially in this age of virtual reality.

I learned a lot in that workshop, mostly I started embracing the clown within me, and realized how much I would’ve loved to see such ‘friendly’ clowns in my childhood! It gave me a different perspective of what clowns are and what they aim to do with the audience. When I received an email from CWBSA asking me to be a part of their upcoming Playtime Antics Tour, I was soo happy.  I did not think twice about it, I mean who would??!  I said YESSSS at the same time! 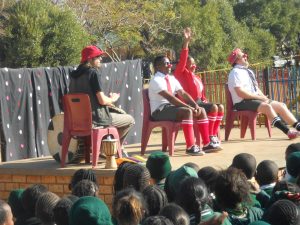 This was my first tour ever as a clown, and to schools. What was so interesting about this tour was the fact that we went to schools that spoke different languages, had different races and abilities! However, the show could accommodate everyone regardless of what they could/not do, #the power of clowns!!

If I were to talk about a day that stood out for me during the entire tour, I would choose the one where we were performing in a school that had children in which some were hearing, Deaf and blind, all in one school! Firstly, this was my first time ever performing with Deaf artists, for a Deaf audience. Now seeing the blind ‘watching’ the show, sitting next to the Deaf and hearing, was just out of this world! The laughter, excitement, joy, curiosity…was just too special. For me, that was a heartfelt moment. It made me fall in love with art all over again! The power it has to entertain, teach and unite, children were children again! 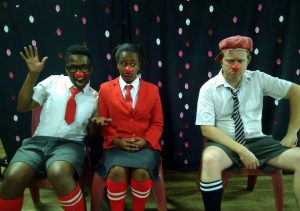 Through this experience I grew a lot from both performing for children with different abilities, and working with artists with different abilities and talents. It didn’t end there, I learned a bit of South African Sign Language! What was amazing was sitting with the guys and conversing with them through sign language. Sometimes getting frustrated that I could not understand what was being said, at times being proud that I actually responded well to what I wanted to say! Also when going to Deaf schools, after the performances, the children would come to us and start conversing through sign language.  In the beginning, I would sign, ‘hearing’, because that’s all I knew, and that’s where our conversation would end. But I got to a point where I could sign, ‘hearing, but can sign a bit!’ and I would actually converse with them through sign language!! 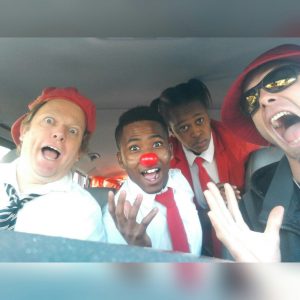 Hearing or not hearing, that’s the only difference there is, otherwise all children are special and they deserve to be children when they’re children!

They all deserve good laughter!

Big shout-outs to the CWBSA team and all the funders!