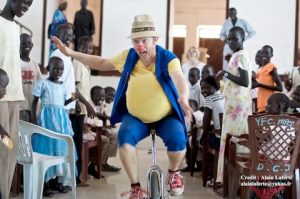 We wake up early and head to Juba Airport. It’s a crazy adventure. Lots of people queuing at various counters, its not really clear which one we should head for. We are flying on a World Food Program humanitarian flight. Eventually we are checked in, someone goes through our luggage, laughs at my unicycle jammed into my suitcase. We step into cubicles and are patted down. It seems the x-ray machines are only ornamental. We wait in the boarding lounge for quite a while, waiting for someone to wave a small boarding pass the same color as ours. It’s seems only Uganda Air has a PA system to announce it’s flights. We have to take two flights to get to Aweil. I’m getting worse and worse at this flying thing. I just hate landing. We land at Wau (pronounced WOW!) and I see I have just made my first landing on a dirt runway. Then I see the two wrecked airplanes at the end of the runway. I try to ignore them. We spend most of the day sitting at the Wau Airport waiting for our connecting flight to Aweil. It’s a small plane, less than 20 seats, so it needed to make a couple of trips. We are on the second. As it’s such a small plane, we start coming down very shakily towards the ground and I try to ignore a few more wrecked planes as we land on another dirt runway. Aweil! The town is a bit smaller than Juba with great people, and a more relaxed atmosphere. We drive out of town and do a show in a village about 10 minute away. As we drive off I think my usual thoughts about what the kids that had just seen the show are thinking. “What the… “What was that? Who were those people? What was it all about…?” I wonder if they will ever see a show quite like that again.

Tuesday
In the morning we do another show and at chaotic workshop at the local school, and then spend the afternoon at the local hospital run by Medicins Sans Frontiers (the French Doctors Without Borders). We do some walk around entertainment at the OPD. Sometimes we bring the house down, sometimes we look at each other and think “now what?” We do the show in the courtyard of the middle of the hospital for everyone who is well enough to come out and watch. Some of the MSF staff came to watch as well and get some well earned laughs. I’m amazed by them, they work so hard, what we are doing seems frivolous if comparison. It’s really inspiring to see how many good people there are in the world, who want to do so much good for others. I’m glad that we can give them a half hour of respite before they head back into the wards to continue what seems to be a never ending workload.

Wednesday
We headed out to Malualkon (about an hour west of Aweil). After our show and workshops at the local school we were treated to an acrobatic display by some of the school kids. They were cartwheeling, leaping and tumbling. Then they even set a hoop of wire alight by putting paper soaked in petrol around it, and leapt through it. I wish we could spend a bit more time with these kids, maybe bring an acrobatics teacher to work with them, but we have to keep moving. (Maybe another time…?) Right now this country is in a kind of limbo. Nobody knows what is going to happen with the coming election and the possible referendum. But kids are still kids. They love to play and to laugh and I’m so glad I have had the opportunity to visit and meet all the wonderful people I have met. I hope this country can find peace. I hope these kids can stay kids and not become soldiers and refugees like their parents’ generation.