South Sudan was such an intense tour, with a ton of emotions, reflections, and engagement. It feels difficult to summarise this experience into a few paragraphs. However, this blog is my attempt to do so. 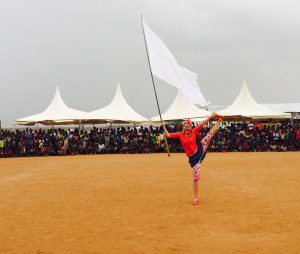 During the arts-based workshops that we hosted we sang a song called “Zum Gaeli Gaeli”.  The song is about planting seeds that can grow into plants which can produce juicy fruit. As explained by my fellow clown, Banana, this song is a beautiful way to explain the work Clowns Without Borders does in metaphorical way. The clowns plant the seeds of play and laughter and it’s up to the participants to water the plants to be able to enjoy the fruit. I am sure we planted many seeds in South Sudan, but the people we encountered and the tour itself also planted many seeds in me. Over time, I look forward to discovering what different kinds of plants and fruit I can harvest within me. 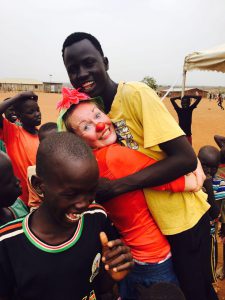 “In the morning [before the workshop] we were sad, but now we are full of joy.” “It does not matter if the workshop is the same, I want to come again because I felt so good after the first time.” “Clowns are great because they make me forget my mom is no longer here.”  These very touching quotes serve as proof of the psychological relief we offer the people living in harsh conditions. I have come across prejudice against CWB’s work, as some people think it would be better to send money to places in crisis than clowns. I can admit that the good and positive effects of this work can be difficult to measure but not everything can be cured with money. I am mostly not bothered by such criticism as there will always be different point of views and values, and people are entitled to their opinions. The best way to explain the effects for people in doubt is to let them see it themselves. This proved to be the case even with the employees of the organisations we partnered with in South Sudan. So many came to us to confess their initial doubts in what we did and how they saw the effect and thus understand the value of the work that we do. For me there has never been doubts about the power of connecting, laughter, touch and interaction. 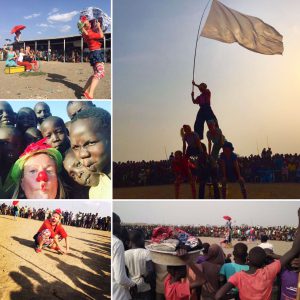 Although the tour enabled me to be in a position where I could spread and be surrounded by positivity, I also had some difficult moments. One physical obstacle was the cruel heat which on average was +40 degrees Celsius. Coming from northern hemisphere this was a lot to handle for my sensitive body. No matter how much I wanted to do more and be with the kids I had to find ways to save my energy to be able to continue throughout the whole tour. Other difficult moments were witnessing how little people have. When we played a mime game called “The Gift”; everyone used their imaginations to access an invisible box and take out whatever they’ve ever dreamt of out of it. Most of the children took food out of the box; a clear sign of their awareness of what they lacked. One young boy sat on the ground and drew a circle that represented a bowl of food and started eating from it.  That moment made me very emotional.  I had to quickly compose myself so that no one would notice my tear-filled eyes. Someone once told me that these kinds of tear-filled moments are indicative of pure love and compassion. I want to believe in this as it is not my place to pity anyone.

Another difficult moment was biding the children farewell. Hearing the children ask about when we plan to come back and seeing them running after our car for the last time, was very difficult. With the situation in South Sudan it what is, one never knows what will happen next. Continuity and sustainability is one of the strong CWB’s values and I hope to get back there soon to help harvest some of fruits that grow where we’ve been.

I left South Sudan behind with full of love, belief, and hope! I’m grateful for the experience. I took all the twinkling eyes of all 20000 people for whom we performed for and I can still hear the roaring laughter in my ears. My appreciation for humanitarian work is endless, and grief for the victims of war bottomless. I do not know about tomorrow, but during the times we laughed, played or just were together everything was more than good! I am overwhelmed, once again, by the power of laughter and play.

Peace and love
Janna Haavisto is a Finnish actress and a clown. She has done MA studies in Physical Comedy in Stockholm School of Dramatic Arts with collaboration of the Swedish Clowns Without Borders. Before she has toured with CWB in Moldova, Burma and India. She feels privileged to be able to give back to the world with her own speciality. Janna also works as a Hospital Clown in Finland.