Nairobi, Kenya – No! Nobody needs permission to have fun! 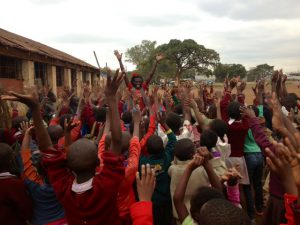 We just finished a great performance tour for our partner in Kenya, Hand in Hand Eastern Africa (HiH EA). The show itself has been rolled out in two weeks, comprising of two shows per day, and sometimes more than an hour travel between destinations. This team of clowns is very special, I must say. We have two Swedish clowns called Josefin and Malin (aka Apple), one every-crazy Spanish clown called Claudio, two fantastic Kenyan clowns from Sarakasi called Irene and Mukasa, and of course those of us from CWBSA, Annabel Morgan (aka Banana) and myself, Nicholas Mamba (aka King’ang’i). The driving force behind the team was Samantha Holdworth, our artistic director, who has been omnipresent throughout the tour, either physically or by her very thoughtful notes even in her absence.

Our day normally starts with us in the van/combi travelling to the performance venue. Mukasa (what a talented soul) will normally take his guitar and start playing a song. Somewhere in the middle, the song will turn out to be about the whole team of clowns! He will sing about anything from what we had for breakfast, to the actual performance content. The whole vehicle becomes a safe space for the clown to be happy, creative and to have that emotional massage! Before every performance the clowns gather to brainstorm the best way to perform that particular show, and there is a certain clown that will ALWAYS visit the loo!!!

The performance is top notch, with a wide variety of themes: acrobatics, cooperation, domestic situations, parenting, dance. Our performance grows everyday, because that is what our director encourages us to do. Our audience, which primarily consists of the young mothers that HiH EA work with, children, elders and motorbike drivers, crack up with laughter when Apple appears as a policewoman to arrest the female Matatu driver, Irene! Mukasa provides the soundtrack of the performance as a Matatu conductor, while Banana stuns the audience as she runs away from trouble, hiding herself under anything – even the hat of a man in the audience! They get the best side of clown dance from Claudio and King’ang’i, while Josefin cries like a baby in one scene, only to become a tough guy/girl in the acrobatic scenes!

The audience has really enjoyed the shows. This experience has reminded me that fun is fun.  We all have the ability to create and enjoy fun. Come closer to the clown! There is no need for one to seek permission to have joy!