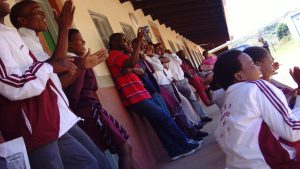 Ufafa Region, KZN – The name ‘Ixopo’ invokes a far off outpost in the most rural of provincial hinterlands. But leaving Durban at 3pm and arriving before dinnertime was not the long journey I had anticipated.
But distance is not always measured in time. The misty hills and winding roads rose above fertile green valleys. We whisked by rondavels and paused for crossing cows, further validating the mood of arriving in another world; far away from the clammy harbour, the Bat Centre, of rain puddles and grime.
Sipho aka Zumba, Busi aka Dombolo and Sabee aka U.B.U. are seasoned guests and known in the region for their clown antics. Our artistic director/tour manager Jayne aka Batzofin is a first time visitor. As for me, being a new collaborator, designated to provide percussion for the show, I was filled with the fizzy trepidation and disbelief of a newbie. How did I qualify to be involved in such a dynamic project in this talented team, facilitating educational, spiritual and emotional needs of communities in crisis through the medium of fun, laughter and plastic red noses? 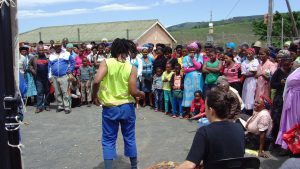 After an early dinner we found our rooms at the Buddhist Retreat Centre (BRC) where noble silence is required when one enters. My teammates, despite suggestions to the contrary, had little interest in nighttime clowning fun. Eventually any restlessness subsided and my eyelids succumbed.
Clowns Without Borders is a long term partner with our Ufafa region hosts the Woza Moya community organisation. Their premises are a 5 minute drive from the BRC down a forestry plantation road. On arrival we were warmly welcomed by the staff and it was an honour to join them in their morning prayer.
Care Worker Mam’ Thembi joined us from there and we drove down into the valley to debut the ‘Know Your Rights’ show at Nonkwenkwane High School. At this time of the year many learners stop attending school as their assessments are done. Luckily the audience had been at school that morning for an exam.
As we began I could hear the echo of the valley walls on the gravely playground. Drumsticks beating the s’ghubhu drum, the sun beating down on us.
The repertoire unfolded smoothly, even though in one particular sequence the learners timidly withdrew from Busi when she tried to select a volunteer for a routine. However, a teacher willingly obliged and was received with riotous laughter.
Go team! Go clowns!
– Roya Varjavandi, 01 December, 2013
~~~~~~~
The week in numbers:
Days: 5; Shows: 7; Workshops: 2; People reached: 633; Children to entertain in broken Zulu: 35; Goat sightings: 29