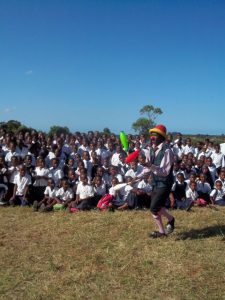 Read our updates by Madame Jiji from our tour in Richards Bay!!!

We are on our 4th day in Richards Bay, Zumba (Sipho Mdletshe), Super (Mr Fish), Banana (Annabel) Morgan) and myself Madame JiJi (Sibongile Tosanyane). We are having FUN by performing in schools around the area. We are performing 10 shows this week. So far, after 6 performances, the audience has been amazing. The schools are organised and teachers are excited which makes our job easier. NOAH (www.noah.org.za), the organization that we working with, has been great so far and so organised. You can imagine, when clowns are happy it means that they are enjoying themselves when performing and that makes the show to be even more FUNNY! Hey! I’m off to prepare myself for todays shows, see you later!!!!!!!!!

Once again Clowns without Borders South Africa with (S’bongile, Annabel, Sipho and Mr Fish) took to the Rural areas of KwaZulu Natal in Richards Bay. Like always, the Clowns love getting lost first before arriving – Hahaha! 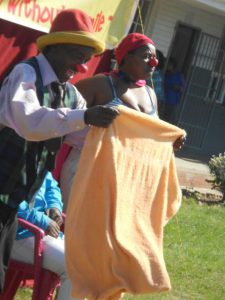 Come Monday, we first had to meet our partners NOAH, who i think they were very organised which shows how serious they were about the work we have come to do and made our job easier. It also allows us to focus more on our performance and bringing the best for the children. We performed for 10 different school around Richards Bay. The first two shows went very well from the teachers receiving us very warmly to the children who were the best audiance. On the second day, things went even more better which made us to take the performance to another level we started to interacting with the audiance which they loved very much. The third and fourth days were even better! AND on our last day, in our first school we had to start very late because of the number of children and fact that they were too excited to see us. It was a bit chaotic but the last show was great.

Working with NOAH Richards Bay was wonderful. We performed for more than 2,600 children over the week. It was a great trip and we really enjoyed ourselves.

We would like to thank our partners NOAH for everything and not forgeting our funders – LOTTO, RMB BANK, and EUROPCAR for make things possible for us to go out there and let CHILDREN BE CHILDREN AGAIN!!

The name of the show is Shosholoza kari masha nareshiba urishi!