Some snapshots from CWBSA of the different experiences doing a performance tour with Clowns Sans Frontieres in Cape Town from 19 Nov – 2 Dec. 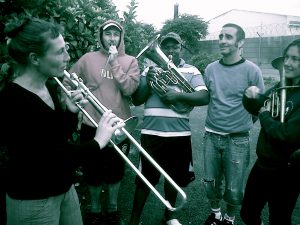 What a journey it has been to bring together Clowns Without Borders South Africa and Clowns Sans Frontieres France! Imagine ten clowns coming together to create a show in three days, most of us never having met before, and some not even speaking the same language! Imagine creating a brass band with a bunch of clowns and only two professional musicians! It was a great challenge to overcome these borders and try to find the meeting point between these two chapters of Clowns Without Borders, but one that we have overcome with laughter and patience. For the first couple of days we just played together and focused on building the sense of play and trust. The two French musicians had fun and accessible ways to introduce us to our instruments and to the art of making music together. This was a very liberating way to work and created a feeling of ensemble within the group. The show was then born out of that play, rather than the other way around. This spirit of play has overflowed into the performances and as a result, the show is continually evolving. It is a delicate balancing act to keep the integrity and original intention of the show when there is so much freedom to make new propositions during the performance. I have observed this as similar to the dance of life, where you take two steps forward and one step back. Fortunately in this case, the steps forward are always more than the steps back! And just as the clown world is full of paradoxes, I now feel that we have something very solid yet fluid. Although it was a very different way of working to what we are used to with CWBSA, and the French took us on a very different route, I feel the paths between the two chapters have finally crossed. I say that because I finally recognize the landscape – a smiling, laughing audience of mixed age, race and culture who walk away having experienced something new and hopefully uplifting together. Une collaboration vraiment spectaculaire’! 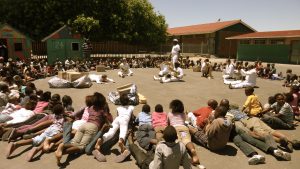 Clowns Without Borders South Africa has recently changed its logo from ‘no child without a smile’ to ‘children being children’. So while doing performances with Clowns Sans Frontieres in Cape Town I have been asking myself the question, “How can that concept bring even adults to be children again?” At one point in the show, all the clowns sing different lullabies from different countries. In one particular performance where we had a mixed audience I noticed from the look in a young man’s eyes that he was visiting his childhood memories. At the same time, children were being children and laughing hysterically at the singing. This confirms for me that not only does CWB cater for young children, but for the child in everybody.

The experience of working with the French clowns has been interesting and all about dignity. In terms of the process, it has been a different way of working. The French have their way of doing things and we have our way of doing things. I have learnt some other things that I never thought would work but at the end I was surprised that it worked. What I have experienced is that as a stunt man, when I do tricks or falls then I do it professionally but as clown I do it but I pretend I don’t know how to do it. As a stunt man when I do a fall, it has to stop there when the director says, “Cut!” but as a clown it has to continue. I remember in rehearsals I did a flip and the French clowns said to me “Don’t control it. We know you can do it but pretend that you don’t know how to do it. It’s funnier like that”. It’s been good.