The Elders of Our Story Your Story 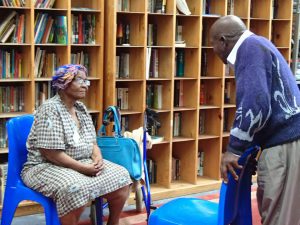 Nyanga, Cape Town – Our last session of Our Story Your Story with the elders from Ikamva Labantu (www.ikamva.com) was extraordinary. So, instead of blathering on about myself, here’s a snapshot of the stories that they will be sharing in our performance.

The first is from a woman named Khuselwa:

During apartheid, blacks were required to carry government issued i.d. papers, or “passes,” at all times. If they didn’t have their passes with them, these citizens could be arrested and thrown in jail.

As a young woman, Khuselwa didn’t have a pass. Thankfully, her husband did, so when they moved to Cape Town, he was able to secure them housing. He also found a job for Khuselwa as a domestic worker for a white family.

One day on her way to work, a police officer stopped Khuselwa. She panicked, and fumbled about, pretending she had lost or misplaced her identity papers in the hopes that the officer would take pity on her and let her go. Instead, he arrested her with several others, and threw her in jail.

The prison was awful. In the twelve hours that she was detained, she was only offered a old piece of brown bread and a cup of water. Khuselwa vowed she would sleep standing up if need be, because the floor of the prison was filthy.

Fortunately, another prisoner who had been released, found her husband and told him the situation. He was able to negotiate Khuselwa’s freedom. Luckily, she was able to keep her job despite her absence that day.

Once Khuselwa shared her story, others told similar tales.

Edith was detained on her way to school. She was just a young girl, but still the police demanded papers. She was eventually released and allowed to continue to school if she told the principal that he must announce to all students that if they were fifteen years or older, they must register for a pass.

Other participants told of police raids on private homes. Officers would come at any hour of the day or night and search homes for contraband. Police ripped these homes apart, leaving dwellings and property in disarray. They would even confiscate cutlery because knives and forks could be used as “weapons.” Families were left to eat only with spoons.

One woman told the story of a police raid that occurred in her neighborhood in the middle of the night. Her elderly neighbor had gone to bed naked. The woman was roused by a furious knock at her door and the bright light of the officer’s flashlight. The knocking and light convinced her that a fire had broken out, and the neighbors were awakening her so she could find safety. (Fires often broke out in the densely packed shacks, and several homes would be consumed in minutes.) When faced with a naked, screaming old lady, the officer was horrified. He directed her to go back inside and cover up. He no longer wanted to search the home, and urged the woman to return to bed. But the woman was so confused she continued to howl, and her cries awoke the neighbors who witnessed the officer’s humiliation.

Those are just some of the stories we heard in our most-recent class.

Working on storytelling in the townships is both a joy and an honor. South Africa is a young democracy, and it is still birthing a culture where every person’s voice can be valued and heard. As South Africa (or any democracy) moves forward, we must support giving public acknowledgement to the full range of citizens’ experience.

Hopefully Our Story Your Story can help promote a democracy of narrative—in which the community wheelhouse of stories becomes more-representative of the diverse range of community voices. There are widely-available accounts of apartheid from educated whites; power and privilege have afforded their voices to be heard. We have also heard from non-white leaders on the forefront of the anti-apartheid fight. But we hope to create a platform for the “average” person’s stories. Our Story Your Story can preserve and disseminate at least some of these stories, so that the experience and wisdom of these elders remain available to future generations. These memories can help future generations better understand their own history and identity.

We are lucky to work with the elders in their last decades, so that their beautiful first-hand accounts of South African life are not lost when they are gone. We are honored to have the opportunity to remind them that their stories are important. We are privileged to be in a position to support them in remembering their past, and sharing their experience. I know their stories have certainly encouraged me to reflect on my personal history, my country’s history, and my own experience in the U.S.’s democracy.

Mostly, though, I feel lucky to now call these elders my friends.