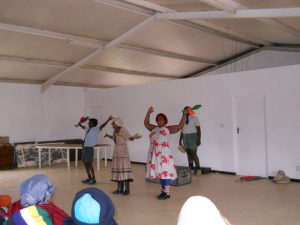 “Forget the cold, laughing is nice.”

I was excited to do shows again. It has been a long time since we visited the Khuphuka community. We are going to be working with the Khuphuka Project – a community organisation that provides support to children and families affected by AIDS in the Mqatsheni area near Himeville, KwaZulu-Natal. As we departed on Sunday, we were not quiet sure about the work we had put together. Our first show was to be our testing point. You see, the thing is that when we rehearsed the show we had no outside eye like we usually do. However, we were still looking forward to what lay ahead, even though we were not a 100% sure of the humour in our show. By that I mean that without an audience, we did not know if there was anything funny about it. The thing is, we thought the routines were funny but then humour is a tricky thing. 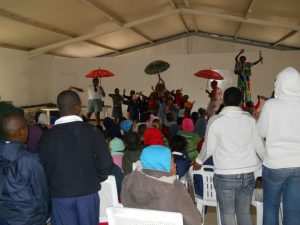 On arrival in Himeville, we were greeted by the cold. I personally am not a fan of cold conditions. The first two days were bearable but towards the end of the week I was sure I was going to suffer from flu. I am used to Durban winter nice and warm even at its peak. Ok, enough about the cold.
Monday 6th June, we left our residence at about 8am to get to the Khuphuka offices to meet our community partner, Sibaya. As we got to our first school, we found the teachers ready and willing. They told us that they have been expecting us and they are so happy that we came. Even though the sun is clear in the skies there is still that cold wind creeps up from time to time. As it a primary school, the little ones in Grade R come out with their little chairs. We start helping then to sit in a semicircle. The older grades follow and, at last, the clowns get ready on the other side of the Europcar sponsored vehicle we were using as our back stage.

We start off with our traditional “Akhi, Akhi, Oi, Oi!” led by Sbongile, aka Sbo, and then into our song of entry which was Sbusiso’s idea. He came up with the tune and we added the words. Giggles start to sprout here and there. I’m like, okay, we are seriously doing this! As the show progressed, there was so much laughter we had to stop and start to give the audience the opportunity to enjoy the moment. The feedback we got after the show was a positive one. I was pleased even though I picked up that the show lacked pace. I knew there and then that we had a good show in our hands but just have to tighten it here and there.

When we get back to our lair at the Khotso Backpackers, we make lunch and then have a chill session talking nonsense that makes so much sense it’s scary. After we are rested, we then discuss the show as to what worked and what didn’t. We went through our routines and fixed what needed fixing. Day 2 was an okay day even though the first school we went to claimed to have forgotten that the clowns were coming – something that happens from time to time when organising shows in deep rural South Africa. This meant the following day we were going to do three shows instead of two. All went fantastically well with our three shows. As we move on with our performances, I start to be more comfortable with our show. When we began I had many doubts as I was doing some routines that were done by others before in previous shows. That was interesting as I had to play at a diva level!

On Thursday there was cold drizzle that hit into the bone. I didn’t want to get out of bed and was not the only one. But there was job to be done and so the clowns marched on to deliver what brought joy to those who opened their hearts to us. Our performances went on without a hitch. We were so excited because our show had become tighter and I believe that we were on top of our game.

Friday, which was our last day in Himeville was the worst weather-wise and best performance-wise. It was freezing and raining at the same time. But as we pulled into the school yard eager faces started popping out from the classroom windows. We were expecting a cancelation but not with this group! The teachers told us that these kids were so excited when they heard the clowns were coming to visit. I must that that Friday show was indeed a show stopper. Those children braving the cold gave us courage to go all out and leave no reserves. Oh, what an amazing show! When I asked the children their thoughts about the show, one girl of about eleven years of age said “Khohlwa amakhaza, kumnandi ukuhleka” (Forget the cold, laughing is nice). It was then that I realized that we have done a special thing for these children even though to it might be simple to others.

Our next stop before we left the cold mountains was at Himville Jabulani Hall. The turnout was amazing. An hour before the show the veranda was packed not only with the children from the home but with community members as well. They braved the weather to come and see the clowns. When the doors opened people started flooding in. We did our show in the hall as it was still raining. The ward counselor or the area was also present. She so loved the show she could not stop talking about it and she wanted to know when are going to visit again. She said next time we come she wants to invite the media of Underberg. What an awesome end to a cold, cold, cold week!

Clowns Without Borders Project Siyazisiza is sponsored by the Rand Merchant Bank Fund, the National Arts Foundation, Europcar, and individual donations. Thank you for all your support!