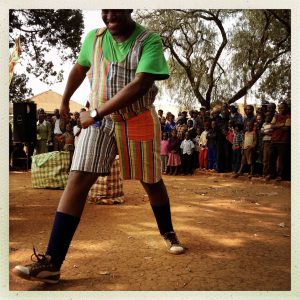 Clowns Without Borders has been working in Kenya since last year, collaborating with Hand in Hand East Africa on their Young Mother’s Project (http://handinhand-ea.org). So far we have been training their trainers in interactive and emotionally responsive facilitation techniques – workshops which have been dubbed by the participants “Project: Free Your Mind”. You can read more about this wonderful project here: http://www.cwbsa.org/node/329

Now, for the first time in this collaboration, Clowns from South Africa, Sweden and Kenya have come together to share joy and laughter through performances in the areas Hand in Hand works in. Here is an account by Sibusiso Khambule, one of our South African performers:

“After our intense two days of rehearsal, we had our first show which was well received. For our second show we set up in an open field, where people watched from a distance but didn’t approach. When the music started playing, children were the first to approach but keeping their distance and really wondering, “Who are these people who set up a tent and attached a rope to a van and a tree?” Then we appeared and danced to the lovely music, smoothing our way towards the children. Once we got their little teeth and big smiles out in the open, we introduced ourselves and charmed them to sit in the grass. 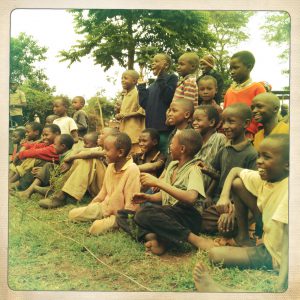 The idea was to let the children sit, get them laughing from our clowning improvisation before the show so that the older people would slowly approach in wonderment. I saw a group of children standing in isolation, so I used my funny clown moves to entice them. I had to explain in English since I can’t speak Kiswahili that there will be a show that is going to start soon if they can come closer to see… they all smiled but didn’t really respond. I didn’t know whether they didn’t understand English or merely wondered why I was speaking English with them instead of their language.

After several attempts trying to explain myself, I found myself thoughtlessly saying, “Come see our show! I will give you all presents!” They all enthusiastically followed me of course. What I learned long time ago in this kind of occasion is that you should never promise something you don’t have, or something you cannot give to everyone, because they hold you to that. And they did!

After the show, we all had a lot of fun dancing in a circle with the young mothers and children. Then they thanked us for coming and told us that they enjoyed every moment of the show. Now when I was getting into the van, a young boy stopped me. “You said you will give us presents!” There was nowhere to hide, and I knew I needed to keep my promise. I reached for my bag, where I knew had a spare red nose.  Without letting anyone know, I gave him the red nose and told him to keep it secret from the others. He thanked me, and with a smile, ran off as fast as he could.

I would have been in a lot of trouble if they all came to me for what I promised them.  At least I kept my promise to that young boy… and learnt my lesson for next time!”