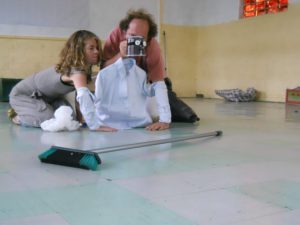 We all converged on OR Tambo airport on the morning of Thursday, the 25th of October. Delia Meyer, from Cape Town, Delia Meyer was the first to arrive followed closely by Durbanites – Mr. Fish, Manono Chitha, our driver, and myself, Sussie Mjwara. We sat at the food zone waiting for 5 French clowns from Clowns Sans Frontieres  – Sebastien, Fabrice, Lohang, Anuk, and Hugue –  and our own team leader, Sibusiso Khambule, who went to wait for them at international arrivals. Finally, the team was together. Time was limited as we quickly introduced ourselves. We had only five days for rehearsals.

Our project, KwaSuka Sukela, was with Medecins Sans Frontieres (MSF) and Women and Men Against Child Abuse (WMACA) and was focused on bringing joy to migrant communities living in the inner city slums. It was part of the South Africa-France Season 2012 in which French and South African artists created cultural exchanges, funded by the Institut Francaise and the National Arts Council, as well as our amazing sponsor, Europcar, who provided vehicle transportation.

Friday began early with breakfast at the rehearsal space at 7:30 AM. Our director, Fabrice, started us with an intense physical warm up. Holy moly! It was hectic. Lots of core strengthening exercises for an hour. He then he taught us some songs from Congo which became a big part of the show.

Saturday, we started exploring the world of puppets.  Anuk, a puppet maker, began creating the first puppet, which I dubbed Mr. What-What, made of a cup, a hanger, and a shirt (see photo). We were divided into three groups where we were to start playing with Mr. What-what. Anuk was teamed up with Hugue and I was with Mr. Fish and Delia, Lohang by himself and Sibusiso by himself. 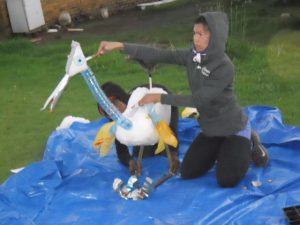 Creative ideas emerged from exploring the puppet. I chose to be the storyteller for our group. This was exciting for me because I thought it was another opportunity to put my training to use. We shared our ideas before we called it a day. It was very interesting to see creative minds combined.

We were to visit two schools and six slum buildings in the inner city. Schools were easy as there were no major safety issues and we have done hundreds of performances at schols. The slums were a whole different story. We were warned about the dangers in the slums and should anything happen we were to just pack up leave straight away. So going there was a scary and new prospect for the team.

On Wednesday, we went to one of these buildings. I have never been to a place like that. From outside, the building appears to be a scrap yard that buys metal from people. Above the entrance, the sign says “We and sell buy metal”. When you enter this place after we pass the security gate we entered into a furniture ware house. We walked for a good 500 metres if not more and found ourselves winding in a dark parking drive way that led us to what seemed to be a former parking lot. Central to this parking space there were blue and white tiny rooms that were fenced with steal net fencing topped with barbed wire.

For the first time, I saw a new world. Shacks are better than this. My heart broke when I saw this place. Little did I know that it was going to get worse. These slums were filled with litter and rats. They were dark – even with the little electrical lighting. There were so many families living there – over a 1000 people – some qualified doctors and lawyers. Some of these people are in South Africa for over 20 years. “People come here and say they will come back but they never do. And then police come and deport us. But we always come back.” Said a man from Zimbabwe. This tour was a great challenge both physically and emotionally. It required great mental strength as well.

We performed for a crowd of adults and children that just got bigger and bigger. The residents identified with the show’s abstract storytelling. They saw the meaning behind the use of brooms and connected to the theme of pollution. Those I had the opportunity to talk with said that they saw themselves in the border crossing scene. “They send us back to our countries but we never give up, we always try again. Some of us die trying.” Says this young man with a grave laugh.

A new awareness dawned on me. This life is cruel and these people live under these circumstances. “You made us laugh and forget what we going to have for dinner. Our stress dropped a little and now you are leaving,” said one lady, who was watching the show with her children. “I hope the show was longer. I was enjoying laughing. Thank you for coming,” a young man from Zimbabwe said.

The project was a great beginning of collaboration with Medecins Sans Frontieres. We hope that this we will continue working in this new and challenging environment – a world that needs much laughter and relief in the midst of huge challenges.