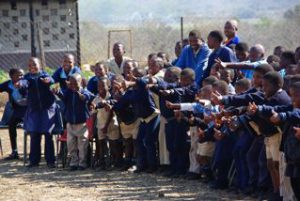 We have recently completed an epic 2-week project in Swaziland this past month. And I do not use the word “epic” lightly due to the scope and size of our work! In collaboration with the Yale University Drama School, People’s Educational Theatre (PET), and the Lutheran Development Service(LDS), Clowns Without Borders developed 2 shows, performed 9 times for over 5,000 beneficiaries while conducting 4 5-day follow-up residencies with children and guardians affected by HIV/AIDS, poverty, and drought.  We had 23 artists, 4 faculty members, 4 vans, and 1 helpful hand from Pig Iron Theatre in the United States. Although it has been more than 2 weeks since I have returned, the experience still resonates deeply for all involved!