Winds of more than 200 kilometres an hour hit Zimbabwe on 15 of March 2019, bringing tonnes of water to the Manicaland Province. Cyclone Idai was the strongest recorded cyclone in the Southern Hemisphere. The storm wiped out roads, bridges, and dams as it swept through Southeast Africa.  More than 100,000 homes were damaged or destroyed, along with at least 1 million acres of crops. Food scarcity will worsen in the coming months. Hundreds of thousands are homeless and displaced. Many people have lost family members and friends and seen their communities devastated.  The hardest hit areas were Chimanimani, Chipinge, Nyanga and Mutare districts in Manicaland Province. In April, the UN and the humanitarian community launched an appeal requesting for US$60 million to provide support to 270,000 people affected by Cyclone Idai.

UNICEF has stated more than 1.5 million children require urgent assistance. Psychosocial support is one of the key requirements dealing with PTSD, families have seen their homes destroyed in front of their eyes, experienced fear as roofs are ripped off, property and entire families have been swept away by floods, crops and livelihoods are destroyed. UNICEF is also deeply concerned about the safety and wellbeing of women and children who are crammed in temporary shelters and at risk of violence and abuse, as well as children who have been orphaned or separated from their families because of the storm.

Clowns Without Borders South Africa and USA joined forces to tour Manicaland Province and Tongogara Refugee Camp on the border to Mozambique. Logistically and administrative-wise, it was no easy task to reach these remote areas, however the aim was to bring play and laughter to children and families who may have lost everything to the natural disaster. 20 performances were organised from Harare, to Chimanimani camps to the Tongogara Refugee Camp. Children, adolescents and parents were the target audiences, with some time spent as well in smaller workshops at the refugee camp. The project was completed in a more intimate setting playing with children in a Cancer Ward in Harare. The team left the country with warm hearts and a determination to return to the resilient country. 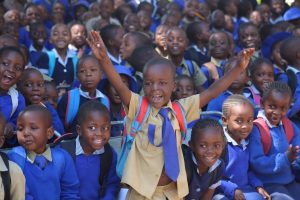