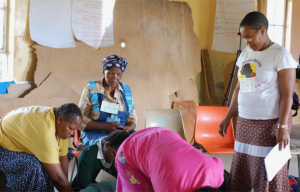 Clowns Without Borders South Africa is thrilled to be part of this ground-breaking research from the Universities of Oxford and Cape Town demonstrating the impact of our Sinovuyo Caring Families Programme for Parents and Teens on reducing domestic violence and improving economic resilience.

A major initiative to help teenagers, parents and caregivers in disadvantaged communities to form stronger relationships and improve teenagers’ safety has been shown to succeed, according to trial results published today in BMJ Global Health.

Since 2012 the Sinovuyo Caring Families Programme for Parents and Teens has been transforming family relationships in severely at risk communities, where access to services is limited. From its small beginnings in South Africa’s poorest province, the initiative has already rolled out to six other countries (the Democratic Republic of Congo, Kenya, Lesotho, South Sudan, Tanzania, and Uganda) with plans for at least two more in 2018 (Zimbabwe, Haiti).

Known as Sinovuyo in South Africa, which means ‘we have joy’ in isiXhosa, the programme is more broadly known as Parenting for Lifelong Health. It was developed by researchers at Oxford University in collaboration with the World Health Organisation and UNICEF, the University of Cape Town and the NGO Clowns Without Borders South Africa. The initiative is supported by funding from the European Research Council, WHO, UNICEF, Leverhulme Trust and the Economic and Social Research Council.

Since launching six years ago, uptake for the programme has been extraordinary. Organisations from UNICEF and USAID to Catholic Relief Services, Pact and World Education Inc.’s Bantwana Initiative, have already delivered the free programme to over 200,000 people across Africa. It has even already expanded its sphere of impact, and is being implemented and evaluated for children and families in East Asia and Eastern Europe.

The cluster randomised controlled trial was conducted with 1100 participants across 40 townships and villages in South Africa. During the trial, the region was beset with severe violence – riots, petrol bombing, violent protests and utility shortages. However, despite such highly challenging circumstances, the programme kept running and supporting families.

Professor Lucie Cluver, Professor of Child and Family Social Work at Oxford University, said: ‘Parenting a teenager is never simple, and families living in low-resource countries deserve the best research evidence to help them. Parenting for Lifelong Health programmes are now reaching over 200,000 children and families in the places that need them most.’

Cathy Ward, Professor of Psychology at the University of Cape Town, said: ‘This programme is now hugely popular among agencies serving low- and middle-income contexts, and promises to make a difference in the lives of many parents and teens.’

Feedback from Sinovuyo participants has been equally positive and shows the scale of impact that the programme has achieved in little more than five years’ of operation.

A teen participant in the Sinovuyo programme said, ‘My mother is praising me. I used to come home late but now I come home early. We sit together and talk to each other.’

A caregiver participant commented: ‘I learned that there is no point to shout to a child in order to get your point across. I should be calm, sit him and gather the facts. So that he could be at ease to tell me. I should not raise my voice at him and beat him.’

2018 looks set to be another eventful year for Sinovuyo, with studies into a larger scale-up of the children’s version of this programme planned in Thailand, the Philippines and Eastern Europe.

Raising a child, especially during adolescence, is difficult even in the best of circumstances. But in places/communities where poverty and violence are compounded by limited social services and high rates of infectious illnesses, like HIV and AIDS, this challenge is ten-fold. According to United Nations research there will be 430 million teenagers in Africa by 2050.

There are a number of programmes available worldwide that offer services to help maintain and strengthen carer-child bonds, but they tend to carry a hefty fee, often pricing poorer families in low-income regions out of benefiting from them.

So the Sinovuyo Caring Families Programme for Parents and Teens was set up in 2012 by researchers at Oxford University in collaboration with the World Health Organisation and UNICEF. The initiative started with a grant of just US$10,000 for Oxford from the WHO and was called ‘Parenting for Lifelong Health’. It is run in partnership with the University of Cape Town and Clowns Without Borders South Africa, a small NGO based in Cape Town. Subsequent funding has come from the European Research Council, UNICEF, Leverhulme Trust and the Economic and Social Research Council.

The core purpose of the 14 week programme is to help teenagers and their caregivers build healthy, caring and honest relationships by providing them with understanding of what kind of attitudes and behaviours are required to achieve that; and a set of life skills, such as family budgeting and problem solving, that help reduce the reasons for conflict in a family. The course aims to support families to improve both their behavioural and economic dynamic. Activities include advice on how to budget on a low income, role plays that practice praising each other, conflict resolution and problem solving and planning safety measures to better protect teens from the risk and exposure to sexual predators in the community.

Resources from a 2015 visit to the project